I present you my version of Two-Face.

Harvey Dent was Gotham City's amiable and courteous district attorney and one of Batman's strongest allies until Sal "Boss" Maroni threw acid in his face, hideously scarring him. It also fractured his mental state, causing him to become Two-Face, a schizoid criminal mastermind obsessed with duality and the number two. His former good luck charm, a "two-headed" silver dollar with one side deface has been seized on as a reflection of Dent's half-scarred visage. He flips it to decide the fates of his victims. Despite Batman's efforts to reform his former ally, Dent is consumed by his fixation on chance and his crimes are designed to prove out his diametric philosophy.

supports needed for the jaw 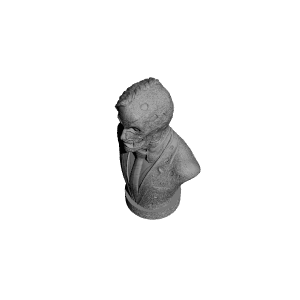 Thank you for the wonderful model. It took 7.5 hours to paint. I love it! Edit: changed print to paint.