Two Shepherds with a Dog

3D
Scan The World
1,437 views 53 downloads
1 collection
Community Prints Add your picture
Be the first to share a picture of this printed object
0 comments

Two Shepherds with a Dog

Fragment of a depiction of the Nativity made in Northern Italy (province of Piacenza).

In Christian theology the nativity marks the birth of Jesus in fulfillment of the divine will of God, to save the world from sin. The Shepherds were the first people to find out about this event. It is generally considered significant that this message was given to shepherds, who were located on the lower rungs of the social ladder. Contrasting with the more powerful characters mentioned in the Nativity, such as the Emperor Augustus, they seem to reflect Mary's words in the Magnificat: "He has brought down rulers from their thrones but has lifted up the humble." The shepherds also combine with the gentile Three Magi, in later tradition thought to be one each from the three continents then known, to represent the first declaration of the Christian message to all the peoples of the world.

Another part of this scene can be downloaded here. 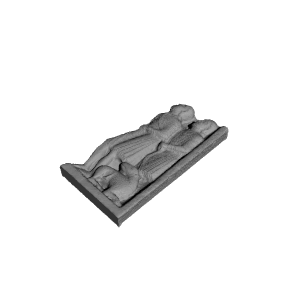