The Wrestlers (also known as The Two Wrestlers or The Pancrastinae) is a Roman marble sculpture after a lost Greek original in the third century BC.

The two young men are engaged in the pankration, a kind of wrestling similar to the present-day sport of mixed martial arts. The two figures are wrestling in a position now known as a "cross-body ride" in modern freestyle wrestling. The upper wrestler has his left leg entwined with his opponent's left leg, with his body across the opponent's body, lifting the opponent's right arm. In a well-known modern series of wrestling moves, the upper wrestler would now try to lift his opponent's arm above his head to force a pinning move called the "Guillotine." Their muscular structure is very defined and exaggerated due to their physical and sustained effort. 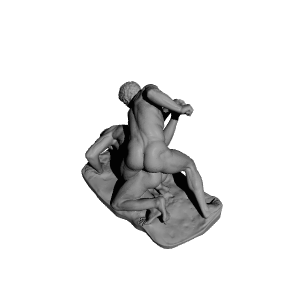