Ugolino and his Sons

3D
Scan The World
3,360 views 123 downloads
Community Prints Add your picture
Be the first to share a picture of this printed object
0 comments

Ugolino and his Sons

In the 13th century, Ugolino della Gherardesca was the leader of the Guelphs in the Italian city of Pisa. Suspected of treason was the nobleman by his rival, the archbishop Ubaldini dei Ruggieri, with his four sons locked in a tower, where they all died of starvation. Ugolinos fortunes were described by Dante Alighieri (Inferno, Canto 32-33). The theme was popular in 19th-century sculpture. Both Jean-Baptiste Carpeaux and Auguste Rodin processed it into sculptures. Through his expressive expressiveness Lambeaux showed Ugolino and his sons, his debt to Rodin and his relationship with the tormented style of the young George Minne. The image is a hitherto unknown composition and perhaps a single copy. 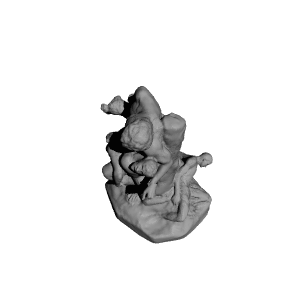