3D
Scan The World
2,120 views 153 downloads
1 collection
Community Prints Add your picture
Be the first to share a picture of this printed object
0 comments

When Achilles has been slain in front of the walls of Troy, his splendid weapons, which have been made by none other than the blacksmith god Vulcan, are to be awarded to the bravest warrior. Ulysses and Ajax both claim them, and the goddess of wisdom, Minerva, who is recognisable from the owl and is here seen at the centre, decides that Ulysses should have them. The relief shows how Ulysses on the left is pointed out as the winner and has the weapons handed over. In the opposite side we first see Achilles’ tomb with the urn and with his sorrowing mother Thetis sitting there, and then on the far right Ajax, the loser, clasping his hands to his head and leaving the scene. Ajax is so upset at the decision that he later commits suicide. 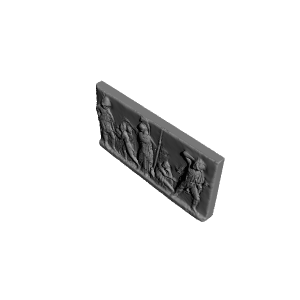