3D
2,367 views 62 downloads
1 collection
Community Prints Add your picture
Be the first to share a picture of this printed object
0 comments

Customize your own, it's easy!

This is a tessellation chunk for the new pentagon discovered in 2015 by mathematicians Mann, McLoud, and Von Derau. The chunk itself tessellates by translation, so you can print out multiple copies and put them together to cover a large area with no gaps. Within this chunk are four copies of the 12-unit tessellation pattern for the new Mann/McLoud/Von Derau pentagon, where each of the 12 units are given a unique integer height from 1mm to 12mm.

Use it for the ultimate 3D math geek wallpaper!

Read more about the discovery of this special pentagon at:
http://www.huffingtonpost.com/entry/historic-tile-discovery-gives-math-world-a-big-jolt_55d3e39ce4b07addcb4495ba 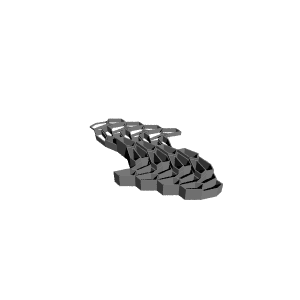