Ulysses at The Palace of Versailles, France

3D
Scan The World
3,785 views 300 downloads
1 collection
Community Prints Add your picture
Be the first to share a picture of this printed object
0 comments

Ulysses at The Palace of Versailles, France

Ulysses, the Latin equivalent of the Greek Odysseus, was the king of Ithaca, a Greek island. He was married to Penelope and they had a son named Telemachus. He was one of the Greek leaders in the Trojan War. The Greeks fought the Trojans for ten years, but Ulysses came up with a plan to burn down Troy and save Helen, the wife of Melanos, the Spartan king. He had the Greek army build a wooden horse that he and nineteen other soldiers could fit in. All of the Greek warships left the shores of Troy and left the horse behind. The Trojans thought that it was a gift from the Greeks, so the people of Troy brought it through the gates of the city. Late that night, Ulysses and the nineteen soldiers snuck out of the wooden horse and let the newly arrived Greek army through the gates. The Greeks burned down Troy and saved Helen, but Ulysses still had a long journey ahead of him.

Once again, Ulysses' men ran out of food, so they landed on another island. The sailors divided into two groups, Ulysses and some of the crew stayed with the ship, while the others went to look for food. The next morning, one of the "food-searchers" came running bck to the boat. The sailor told Ulysses of a sorceress named Circe who had turned the other crew members into hogs. At once, Ulysses ran with the sailor to Circe's palace, but on the way, Mercury came with a gift from one of the gods. It was a magical flower that would act a shield on Ulysses from Circe's magic. Ulysses met with Circe. Circe tried to use her magic on him, but it didn't work, so she gave in and turned the back into humans. Plus, she warned Ulysses of the dangers to come. With lots of food, Ulysses and his men left the island.

Thanks to Circe, Ulysses overcame the next dangers. He overcame the dooming song of the Sirens by plugging the ears of he and his crew. The sailors came upon the six-headed monster called Scylla. Though all of his crew were eaten by Scylla, Ulysses escaped, only to be washed ashore by a storm where a princess found him and took him to her father. The king gave Ulysses his fastest ship to use to sail home with. When, Ulysses reached Ithaca, he deceived the men that wanted to marry his wife, and killed them. Ulysses finally reclaimed his throne. 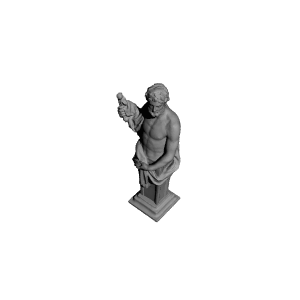 ×
1 collections where you can find Ulysses at The Palace of Versailles, France by Scan The World