Ulysses on the Island of Calypso at The Palais des Beaux-Arts in Lille, France

3D
Scan The World
4,882 views 355 downloads
2 collections
Community Prints Add your picture
Be the first to share a picture of this printed object
0 comments

Ulysses on the Island of Calypso at The Palais des Beaux-Arts in Lille, France

This is a larger than life figurative sculpture in marble carved by Théophile François Marcel Bra (23 June 1797, Douai - 1863). Bra was a French Romantic sculptor and exact contemporary of Eugène Delacroix. He was deeply involved in the Romantic era through his uncompromising personality and complex spirituality. His fantastical inspiration evokes the universes inhabited by Goya, William Blake or Victor Hugo - he was at one and the same time a Bonapartist and an anglophile, a passionate Christian disciple of Swedenborg and an admirer of Judaism, Hinduism and Buddhism.

The sculpture depicts Olysses (or the hero Odysseus) in Homer's epic Odyessy after washing ashore on the Island of Calypso; Calypso is remembered most for her role in Homer's Odyssey, in which she keeps the fabled Greek hero Odysseus on her island to make him her immortal husband. According to Homer, Calypso kept Odysseus prisoner at Ogygia for seven years, while Pseudo-Apollodorus says five years and Hyginus says one. Calypso enchants Odysseus with her singing as she moves to and fro, weaving on her loom with a golden shuttle. During this time they sleep together, although Odysseus soon comes to wish for circumstances to change.

Odysseus can no longer bear being separated from his wife Penelope and wants to go to Calypso to tell her. His patron goddess Athena asks Zeus to order the release of Odysseus from the island, and Zeus orders the messenger Hermes, to tell Calypso to set Odysseus free, for it was not his destiny to live with her forever. She angrily comments on how the gods hate goddesses having affairs with mortals, but eventually concedes, sending Odysseus on his way after providing him with wine, bread, and the materials for a raft. 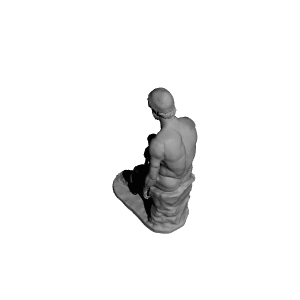 ×
2 collections where you can find Ulysses on the Island of Calypso at The Palais des Beaux-Arts in Lille, France by Scan The World