3D
Scan The World
2,491 views 86 downloads
1 collection
Community Prints Add your picture
Be the first to share a picture of this printed object
0 comments

Late Early Dynastic period clay cone with an inscription by King Enmetena recounting the conflict between his city Lagash and the neighbouring city Umma. The account culminates in his victory and a redrawing of the border. It is presumed that this cone stood among other markers to denote the boundaries. The bottom of the cone resembles a net and corresponds to a warning to natives of Umma that foreign invaders would be ensnared in the net of the god Enlil! 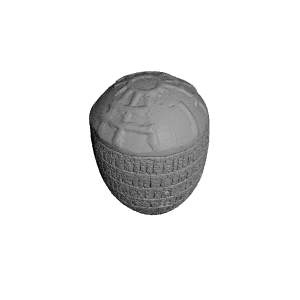