Don't you hate when your filament is pulled in weird directions when printing? Hate the sound of filament grinding against the frame?

Well now you canUnFUC it with this new filament guidance system, specially engineered to be more complicated than most other systems, while also taking longer to print!

Yeah, I know the name is kind of forced and probably not as funny as I hoped.

Anyways, I have seen a few gimbaled filament guidance systems around and figured I'd make yet another one just because.

This one is slightly different since it's two pieces (well technically three, but whatever): The clip which attaches to the printer frame and the gimble assembly.

Having a separate clip allows the gimble assembly to be adapted to any other printer or thing you feel like attaching this to. Please adapt it for whatever your needs are (and share it with the rest of us!)

The only downside to this design is it takes a while to print - about an hour and a half, and it requires some supports for one of the pieces.

The gimble ball has a holejust the right size to fit PTFE tube, or at least the unbranded generic PTFE tube I have. Adding a PTFE tube is optional.

In case you're wondering why there's a zip-tie in one my example print, well, suffice to say I initially measured wrong, about 1mm wrong to be exact. Fortunately the zip-ties I have are about 1mm thick making them a perfect shim to fix my mistake.

This measurement error has been corrected in the included files!

Also, the tolerances are fairly tight for the connectors so make sure your printer is tuned properly.

Speaking of tolerances, the ball has a 1mm gap from the wall. I think this might be too much of a gap, but ehh. I'm too lazy to fix it. You can add a small piece of (maybe like 600+ grit fine) sandpaper, grit facing in between the ball and the inner wall. This will reduce the sound as this ball inevitably moves around during the print. I mention sandpaper as regular paper will eventually fall out; The grit on sandpaper will keep it in longer.

Oh, one last thing. The spool-holder in the render is not a real design; I only made it for the render since I have no life. I might release it at some point after I make it functional...

Needs supports for the part that clips on the printer. Use support blocker under the chamfer on the gimble ball unless you don't care (only affects aesthetics). 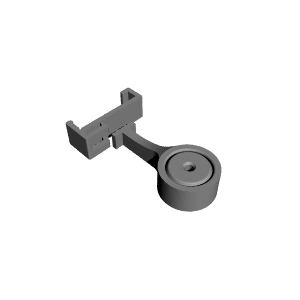