3D
Scan The World
2,951 views 216 downloads
2 collections
Community Prints Add your picture
Be the first to share a picture of this printed object
1 comments

This bronze figurative sculpture depicts a nude athlete throwing a shotput. With the surrounding sculptures at Central House of Architects, such as the similar piece depicting the swimmer Vladimir Salnikov (available to download here), we can presume that this work was made to commemorate the athletes of the 1988 Olympics. The only Soviet shot putter who competed in this year was Sergey Smirnov, who is much less documented than Salnikov, but it can be assumed that he is the person depicted in this work. The sculptor was probably the same as the piece depicting Vladimir Salnikov, though their identity is unknown.

Many thanks to Jerry Fisher, for providing this information! 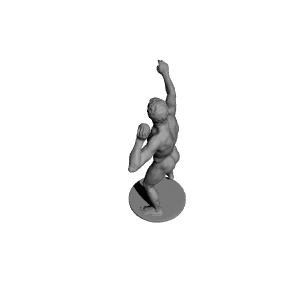 ×
2 collections where you can find Shot Putter, Sergey Smirnov (?) by Scan The World