Unknown Person at The Louvre, Paris

3D
Scan The World
1,835 views 83 downloads
Community Prints Add your picture
Be the first to share a picture of this printed object
0 comments

Unknown Person at The Louvre, Paris

The person depicted in this dignified, moving portrait of an old Roman dignitary, previously identified as the consul Aulus Postumius Albinus, is now considered to be unknown. The sensitive, naturalistic style of the sculpture reveals the dominant influence of Hellenism in Rome at the time.

The age of the old man depicted in this very fine portrait is rendered in a striking manner. The artist is pitless in the use he makes of his chisels to set down all the marks of age: sagging flesh, lips closing over a toothless mouth, wrinkled face, folds of the neck. Nevertheless, the expressive character of the face, with the head turned sharply to the right and the mouth on the point, it seems, of speaking, breathes life into a figure the pride and vivacity of which inspire respect rather than pity.

The large number of surviving replicas of this work have prompted some commentators to see in it a portrait of a famous man. Comparison with heads on coins has led to the names of Mark Antony - Julius Caesar's rival - or the consul Aulus Postumius Albinus being put forward. Neither proposition is truly satisfactory, and it is safer to leave the portrait shrouded in anonymity. It is just possible that it is an effigy of a member of the Roman aristocracy. Only the nobility enjoyed the privilege of being able to have their portraits made and of possessing effigies of their ancestors.

The Roman portrait in the second century BC inherited the verist tradition of ancient Italian art but, at the time of the Roman conquests in the Mediterranean, acquired a Hellenistic coloring. As Rome gained control of the Hellenistic world, Greek works were brought back by the victorious generals, and artists left the conquered kingdoms for Rome, the new capital of the Mediterranean world.
The phenomenon can be seen in this portrait. The pitiless realism of the toothless mouth and the sagging flesh of the neck is characteristic of the portraits of the republican period and brings to mind the custom of making death masks out of wax. The brutal realism is sublimated, however, by the movement of the head, the mobility of the flesh, and the expressiveness of the face, which owe much to the pathos of the Pergamon school. The artist has invested this face ravaged by time with a passion that links it to the tradition of Hellenistic portraiture, endowing this mortal figure with the bearing of a monarch. 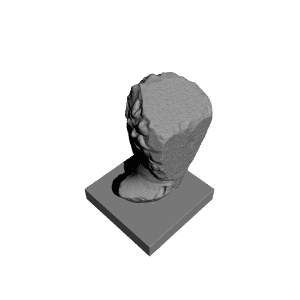 ×
0 collections where you can find Unknown Person at The Louvre, Paris by Scan The World