3D
Scan The World
1,451 views 100 downloads
Community Prints Add your picture
Be the first to share a picture of this printed object
0 comments

This is an ancient marble relief from the north frieze of the Parthenon depicting unmounted youth preparing for the cavalcade. One youth restrains his rearing horse, which longs to join the cavalcade ahead. Anticipation and excitement run through their bodies, tense with nervous energy. The youth's arm is raised to his head in a gesture that was part of a sign language the ancient Greek used when the noise of the cavalcade made words inaudible. The youth glances back at his companion, who looks down, caught in a moment of quiet reflection. Throughout the Parthenon frieze, a figure's mood is suggested by the position of the head rather than the facial expression. 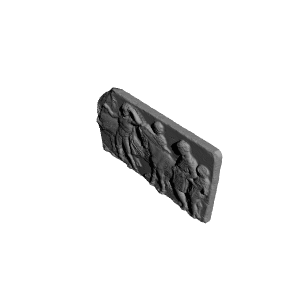