3D
Scan The World
2,243 views 71 downloads
Community Prints Add your picture
Be the first to share a picture of this printed object
0 comments

Limestone bust from a Palmyrene funerary relief; carved with woman wearing a fur edged mantle; holds the end in her left hand; right hand raised to shoulder; high wreathed coiffure from which hangs in front an elaborate ornamental band with three tails on to her brow; also has necklace, finger-ring and ear-ring; background is a represented suspended cloth overlooked by a miniature male figure who holds an object.

There were three types of tombs, all built for wealthy citizens: single-storey house tombs, tomb towers of several storeys and underground rock-hewn tombs. Inside, each tomb contained rows of compartments set into the walls to hold the remains of the dead. Each was sealed with a plaque bearing a stone portrait of the dead person accompanied by a brief inscription. 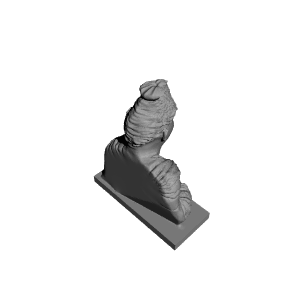 ×
0 collections where you can find Unnamed woman at The British Museum, London by Scan The World