3D
Support Free Scan The World
3,089 views 110 downloads
Community Prints Add your picture
Be the first to share a picture of this printed object
0 comments

Made in 1959, the year Bontecou created her first wall-mounted steel-and-canvas sculptures, this work incorporates soiled canvas taken from conveyor belts discarded by a laundry below the artist's East Village apartment. She stretched pieces of the fabric across sections of steel armature and fastened them to the metal with wire, creating a surface resembling something between a stained glass window and a patchwork quilt. While her early reliefs conjure a wide range of associations, this particular one resembles, among other things, an aerial view of an otherworldly landscape. Sputnik, the first man-made satellite, had recently orbited the earth, launching the Space Age. As Bontecou later recalled of this time, "I had a joy and excitement about outer space—nothing was known about the black holes—just huge, intangible, dangerous entities, and I felt great excitement when little Sputnik flew." 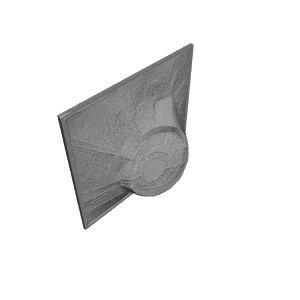 ×
0 collections where you can find Untitled at MoMA, New York by Scan The World