3D
Scan The World
1,124 views 35 downloads
Community Prints Add your picture
Be the first to share a picture of this printed object
0 comments

Krop presented this sculpture at the international contest for the Monument to the Unknown Political Prisoner, which was issued by the Institute of Contemporary Arts in London in 1951. The designs were exhibited in London in December 1952 in Antwerp and March-April 1953. Hildo Krop sent the image 'Urge for life' from 1949-1951 for this contest. His submission was not awarded.

In this statue, Krop's two most famous themesmeet: 'Mother Earth' and the 'Faun'.The faun is folded around the throne of Mother Earth: on the left side we see two goat legs, on the backside the back of the fauna (including a curling tail) and on the right is a twisted fox head with a hand and a bird. Two birds are also visible on the left side of the woman's head. The faun's head is not clearly visible – in fact, as often observed in Krop's work, the head is "crushed". 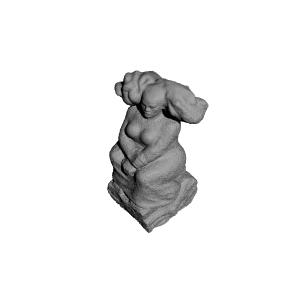