3D
Scan The World
4,081 views 212 downloads
1 collection
Community Prints Add your picture
Be the first to share a picture of this printed object
0 comments

This sculpture depicts two snakes eating their own tails, the scene also known as Uroboros (Ouroboros)

The Ouroboros is an ancient symbol depicting a serpent or dragon eating its own tail. The name originates from within the Greek language; (oura) meaning "tail" and (boros) meaning "eating", thus "he who eats the tail".

This sculpture symbolizes the cyclic Nature of the Universe: creation out of destruction, Life out of Death. The ouroboros eats its own tail to sustain its life, in an eternal cycle of renewal. 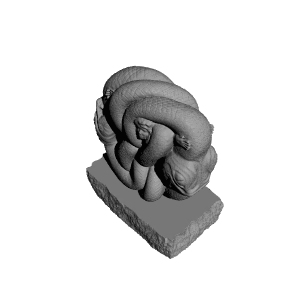