3D
Scan The World
2,716 views 134 downloads
Community Prints Add your picture
Be the first to share a picture of this printed object
0 comments

Uta was among the donators of Naumburg Cathedral, therefore a painted statue was erected in her honour in the 13th century. Similar to the Bamberg Horseman, the individual depiction, part of a semicircle of twelve donor portraits, is today generally considered a masterpiece of Gothic art.

From the early 20th century onwards, the idealised picture of Uta with the distinctive collar upturned was published in numerous art history and travel guides, becoming an icon of the "genuine" German character and culture — often contrasted with the Naumburg statue of Margravine Regelinda as the stereotypical "smiling Polish woman". Her portrait was appropriated by the Nazi regime as a counter-image to so-called "degenerate art"; it appeared as an "Aryan" role model in Fritz Hippler's film The Eternal Jew and as a SS cult object in World War II propaganda

The statue possibly inspired the character of the Evil Queen in Disney's 1937 animated film Snow White and the Seven Dwarfs. When Umberto Eco was asked with which women from European art he would most like to spend the evening, he replied: "In first place, ahead of all others, with Uta von Naumburg." 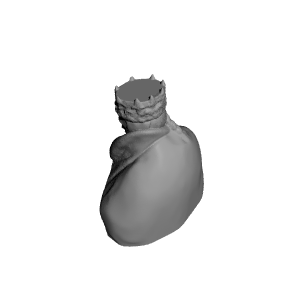