Vase in the Form of a Musician

3D
Scan The World
2,031 views 65 downloads
Community Prints Add your picture
Be the first to share a picture of this printed object
0 comments

Vase in the Form of a Musician

As a means of recording the passage of time, the 13th century was that century which lasted from 1201 through 1300 in accordance with the Julian calendar in the Common Era. In the history of European culture, this period is considered part of the High Middle Ages, and after its conquests in Asia the Mongol Empire stretched from Eastern Asia to Eastern Europe. Year 1220 (MCCXX) was a leap year starting on Wednesday of the Julian calendar.

Ceramics are objects made from clay (or clay mixed with other materials) that are subjected to high heat. This application of heat causes irreversible changes in within the clay body, rendering the form permanent. Ceramics can take the form of pottery (utilitarian vessels), sculpture, casting cores for bronzes, or architectural elements such as tiles, pipes and bricks. Generally speaking, ceramics are brittle and weak under shearing or tensile stresses but very strong under compression. In addition, they can withstand very high temperatures and are not prone to chemical erosion. They consist of both crystalline and amorphous phases, though the ratio of these phases is determined by the specific mineral composition. Ceramic technology in its simplest form has been around since the Neolithic period. There are a host of regional differences in available materials, forms, style and technology that have developed in different parts of the world, making the ceramic arts highly variable across time and space. 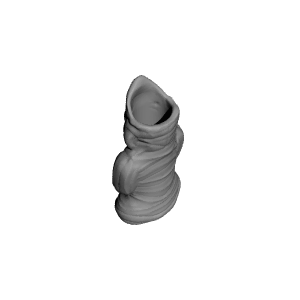