Rafaello Monti (1818-1881) is rarely mentioned in standard Italian surveys of nineteenth-century sculpture. It is as though his self-willed exile to London for most of his working career banned him from any recognition in his native country. Yet, he was one of the period's most prolific sculptors, and he continued to portray, in his inevitably sentimental style, themes dear to the Italian Risorgimento.1Born in Ticino, Monti was brought up in Milan. His training at the Brera Academy introduced him to Pietro Magni and Vincenzo Vela, disciples of the emergent Scuola Lombarda, or "Modern School of Milan," which developed in the '40s. The group sponsored a realist art steeped in social and political implications which was, above all, dedicated to the overthrow of Canova's influence on sculpture. Whereas Monti, because of his travels to Vienna, Budapest, and eventually England, lacked the group's militant zeal, his works nevertheless were influenced by their greater reliance on baroque devices, heightened realism, and sentimentality.Monti is perhaps best remembered for his veiled figures; in fact, he made them his forte. He revived the eighteenth-century tradition of the diaphanously draped figure,2 and with it the veil's connotations of revelation—sensuous or otherwise—and used both to demonstrate his technical brilliance. As in The Veiled Lady the marble is carved so ingeniously and thinly as to appear transparent in those parts where it extends over the facial features.The Veiled Lady3 is one of numerous versions executed during the '50s. Clearly alluding to a classical portrait bust, especially in the clean sweep of the lower edge, the bust transforms its prototype by the sensual treatment of stone and subject. The Veiled Lady (vestal virgin?) captures the perfection of innocence and youth, which, as the dew-fresh morning glories on her crown, will all too soon fade. 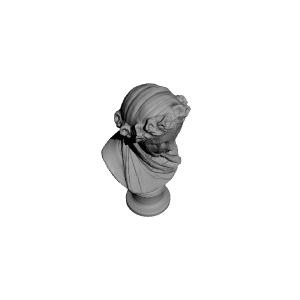 ×
29 collections where you can find Veiled Lady at the Minneapolis Institute of Arts, USA by Scan The World
×
Nick
@Nick-Anthony
2
Printed on: Printrbot Simple Metal
Material: PLA
Posted at: 05th December 2022

Photos cannot do this model justice. The only way to really see this models fine detail is to print it. Printed at 42% scale, and rotated to tilt back 28 degrees. Sliced with Simplify3d at a 0.1mm layer height, 2 perimeters, 3 top and bottom layers, and 40% infill. I tilted the model back to ensure that when supports were in place non of them would be near the front and face area because this is where the highest detail would be located and printed at. I used Simplify3D's automatic support generation set to 1mm resolution for any overhang greater than 45 degrees. afterward I removed any supports, located on the front neck and face region, in the slicer before printing. It took 3 hours to print, volume is 3x1x1 inches, and 15.13 grams / 5032mm in plastic. If I printed this model again... I would enlarge the scale to 100% and take the time to print it's full size because this scanned model is beautiful and printed flawlessly. Thank you for uploading this piece. It now sits on my work desk and provides me with artistic inspiration.

About 1 foot / 30 cm tall; printed in pearlescent white with front inclined 30% to avoid supports on face.

I've seen pictures of this on the internet and now here it is, it had to be printed. I turned it upside down and used tree supports.

One of our favorite pieces at MIA is now on our mantle. Thanks for the model! Printed leaning back at a 30 deg angle with tree supports worked great.