This sculpture depicts Venus standing with a drapery and Cupid, standing next to her.

Cupid, ancient Roman god of love in all its varieties, the counterpart of the Greek god Eros and the equivalent of Amor in Latin poetry. According to myth, Cupid was the son of Mercury, the winged messenger of the gods, and Venus, the goddess of love. He often appeared as a winged infant carrying a bow and a quiver of arrows whose wounds inspired love or passion in his every victim. He was sometimes portrayed wearing armour like that of Mars, the god of war, perhaps to suggest ironic parallels between warfare and romance or to symbolize the invincibility of love and because some say that Venus had a love affair with Mars and he is the real father of Cupid. 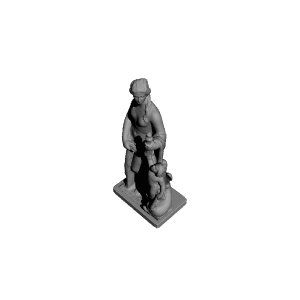 ×
2 collections where you can find Venus and Cupid by Scan The World
×
Rainer Fuchs
@mix579
1
Printed on: Monoprice
Material: PLA
Posted at: 28th June 2022