Venus Callipyge at the Louvre, Paris

3D
Scan The World
5,313 views 573 downloads
4 collections
Community Prints Add your picture
Be the first to share a picture of this printed object
0 comments

Venus Callipyge at the Louvre, Paris

The Venus Callipyge, also known as the Aphrodite Kallipygos or the Callipygian Venus, all literally meaning "Venus (or Aphrodite) of the beautiful buttocks",is an Ancient Roman marble statue, thought to be a copy of an older Greek original. In an example of anasyrma, it depicts a partially draped woman, raising her light peplos to uncover her hips and buttocks, and looking back and down over her shoulder, perhaps to evaluate them. The subject is conventionally identified as Venus (Aphrodite), though it may equally be a portrait of a mortal woman. 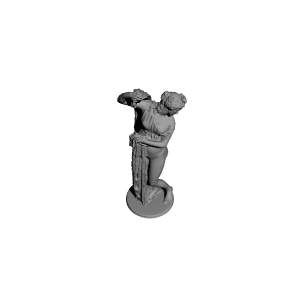 ×
4 collections where you can find Venus Callipyge at the Louvre, Paris by Scan The World