3D
Scan The World
3,530 views 440 downloads
4 collections
Community Prints Add your picture
Be the first to share a picture of this printed object
0 comments

Canova's first marble Venus is in the Palazzo Pitti, Florence. Known as the Venus Italica, it was ordered in 1804 by Ludovico I, King of Etruria, as a replacement for the ancient Medici Venus that had been taken by the French for the Musée Napoleon. This replica, believed to have been purchased from Canova's studio by the third marquess of Londonderry when he was visiting Rome in 1823, remained in Londonderry House, London, until 1962. 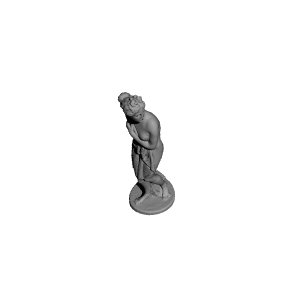