3D
Scan The World
5,157 views 739 downloads
3 collections
Community Prints Add your picture
Be the first to share a picture of this printed object
0 comments

The Venus de’ Medici or Medici Venus is a lifesize Hellenistic marble sculpture depicting the Greek goddess of love Aphrodite. It is a 1st-century BC marble copy, perhaps made in Athens, of a bronze original Greek sculpture, following the type of the Aphrodite of Cnidos, which would have been made by a sculptor in the immediate Praxitelean tradition, perhaps at the end of the century. It has become one of the navigation points by which the progress of the Western classical tradition is traced, the references to it outline the changes of taste and the process of classical scholarship. It is housed in the Uffizi Gallery, Florence, Italy. (Wikipedia) 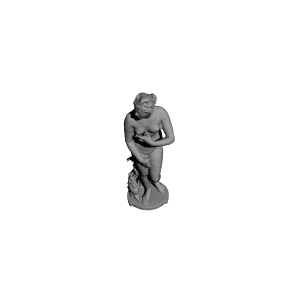 ×
3 collections where you can find Venus Medici by geoffrey.marchal