3D
Scan The World
5,337 views 560 downloads
4 collections
Community Prints Add your picture
Be the first to share a picture of this printed object
0 comments

The Venus of Brassempouy (la Dame de Brassempouy in French, meaning "Lady of Brassempouy") is a fragmentary ivory figurine from the Upper Palaeolithic. It was discovered in a cave at Brassempouy, southwest France in 1892. Being about 25,000 years old, it is one of the earliest known realistic representations of a human face.

The head is 3.65 cm high, 2.2 cm deep and 1.9 cm wide, making it a very little piece. The face is triangular and while forehead, nose and brows are carved in relief, the mouth is absent. A vertical crack on the right side of the face is linked to the internal structure of the ivory. The checkerboard on her head can be interpreted as a wig, a decorated hood, or simply a representation of hair.

It is agreed that the Venus belonged to the Gravettian, an archaeological industry of the European Upper Paleolithic (29,000–22,000 BP). As ivory is very sensitive to many factors, the head is on display in a specific room in the Musée d'Archéologie Nationale at Saint-Germain-en-Laye near Paris, France. 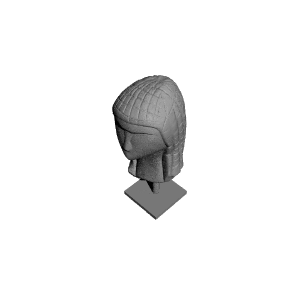