3D
Featured Scan The World
4,005 views 235 downloads
1 collection
Community Prints Add your picture
Be the first to share a picture of this printed object
0 comments

This head of a Goddess, titled The Venus of Martres, is a Roman copy of the Aphrodite of Knidos, a Greek sculpture by Praxiteles, preserved in the Musée Saint-Raymond in Toulouse. The marble work is dated from around the 1st Century AD.

The sculpture was discovered in 186 on the site of the Roman villa of Chiragan in Martres-Tolosane. It is exhibited on the first floor of the Musée Saint-Raymond under the inventory number Ra52 (formerly Inv. 30328)

The marble head presents an overall very good state of conservation with only the end of the nose having suffered erosion. The shape below the head's nape of the neck suggests that it was part of a bust or statue. A band passes twice around the head, bringing the corrugated hair, separated by a medial band, towards the back and assembling into a bun.

In his 1828 catalogue, Alexander the Mege identifies the sculpture as a portrait of Venus, the goddess of love, "...Imitation of nature in what it produced more perfect and ideal beauty even, could not have represented under more admirable forms this goddess whom Lucretius has named the Voluptu of men and Gods."

In 1865, Ernest Roschach considered the work to be that of a representation of Diana, "One could also suggest it as a bust of Diana. It seems that the proud beauty of the face and the energetic development of the muscles of the neck justifies this last attribution and betray the chaste Goddess, accustomed to run the woods and breathe with the lungs the fortifying breezes of the mountains".

There are numerous replicas of this famous work of Praxiteles, which Pliny the Elder placed above all the works of the earth. The Venus of Martres can be compared to that of Medici, Arles and Milo - all can be found on Scan the World. 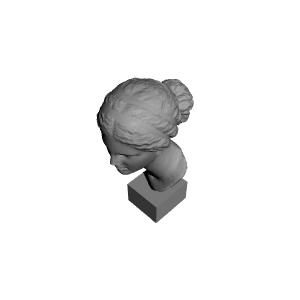 ×
1 collections where you can find Venus of Martres by MatMond