Venus Victorious at the Middelheim Museum

3D
Scan The World
14,012 views 1,987 downloads
10 collections
Community Prints Add your picture
Be the first to share a picture of this printed object
0 comments

Venus Victorious at the Middelheim Museum

The figure of Venus in this sculpture is based on the image of the goddess in a painting by Renoir, 'The Judgement of Paris'. In Greek myth Aphrodite (known to the Romans as Venus) competed for the prize of a golden apple, which she won by promising Paris that he could marry Helen of Troy, the most beautiful woman in the world. Renoir's sculpture shows Venus holding the apple in her moment of triumph. Renoir's conception of this work was influenced by memories of antique sculpture and by the 'modern classicism' of the contemporary sculptor Maillol. Severely crippled by arthritis, Renoir was helped in making this sculpture by an assistant, Richard Guino.

Famed for his sensual nudes and charming scenes of pretty women, Auguste Renoir was a far more complex and thoughtful painter than generally assumed. He was a founding member of the Impressionist movement, nevertheless he ceased to exhibit with the group after 1877. From the 1880s until well into the twentieth century, he developed a monumental, classically inspired style that influenced such avant-garde giants as Pablo Picasso. Renoir began his artistic career as a porcelain painter; however, his ambitions to become a professional artist prompted him to seek other instruction. He began copying paintings at the Louvre in 1860 and eventually entered the studio of the academic artist Charles Gleyre, where he met Claude Monet, Frédéric Bazille, and Alfred Sisley. The four friends soon began painting in the forest of Fontainebleau, although Renoir always remained dedicated to figure painting and portraits. His early female nudes were heavily influenced by the earthy palette and buxom figure types of Realist painter Gustave Courbet.

In the summer of 1869, Renoir painted for two months alongside Monetat La Grenouillère, a boating and bathing establishment outside Paris. Their sketchlike technique of broad, loose brushstrokes and their brightened palette attempted to capture the effects of the sun streaming through the trees on the rippling water. This painting campaign catalyzed the development of the Impressionist aesthetic . After several of his paintings were rejected by the Salon in the early 1870s, Renoir decided to join Monet in establishing an independent artist's society. The Impressionists, as they were called, sought to capture modern life and Renoir's works from this period focused on everyday people, streets, and surroundings. His most iconic painting from this period, Dance at the Moulin de la Galette, explores dappled light as it flutters over young Montmartre revelers flirting, drinking, and dancing. Renoir's penchant for portraiture attracted the attention of a range of patrons with avant-garde sensibilities. From the politically radical pastry cook Eugène Murer to the wealthy society lady Madame Georges Charpentier , Renoir painted all of his patrons with affectionate charm. One of the most splendid and ambitious portraits Renoir ever realized, the painting of Marguerite Charpentier with her children blends a modern informality and intimacy with the compositional rigor of an old master portrait. The painting also prominently displays the Charpentiers' advanced taste for Japanese arts. Portraiture sustained Renoir financially, especially after the Charpentier painting was exhibited at the 1879 Salon to great success. Renoir, in fact, met one of his best patrons, the banker Paul Bérard, at Mme Charpentier's home. They became very close—Renoir painted all of his children  and visited the Bérards' country house in Wargemont regularly, where he explored other genres such as seascapes and luxuriant still lifes.

With his newfound financial freedom, Renoir began to explore other artistic directions. His doubts about the spontaneity and impermanence of the Impressionist aesthetic led him to refuse to participate in the fourth Impressionist exhibition in 1878. Instead, Renoir decided to look back to the old masters for an art of structure, craft, and permanence. His first painting in this vein, Luncheon of the Boating Party, exhibits a new solidity and clarity in the depiction of the figures and their placement within space, especially when compared to the Moulin de la Galette. Renoir left for Italy in 1881 to continue his self-education in the "grandeur and simplicity of the ancient painters." He returned enamored of Raphael and Pompeii and his figures consequently became more crisply drawn and sculptural in character . Reclining Nude is an excellent example of his painting style in the mid-1880s. The marble or porcelainlike figure is sharply defined against an impressionistically brushed landscape. The spatial relationship between the nude and the amorphous background is deliberately unclear. While the back view of the nude quotes the coldly linear odalisques of Ingres, the bushy vegetation and coastal view recall the landscapes Renoir painted on the English Channel island of Guernsey, which he visited in 1883 . This series of sculptural nudes in a vague landscape culminated in Renoir's Large Bathers now at the Philadelphia Museum of Art .

By the late 1880s and early 1890s, Renoir had shifted his investigation of the old masters from linear classicism to the coloristic traditions of Titian and Rubens as well as the unabashedly sensual beauty of eighteenth-century French art. Young Girl Bathing ) exhibits this softened touch. The figure's amplitude, the way her hair blends into the lush landscape, her demure glance away from the viewer, and the caressing brushstrokes allude simultaneously to the nudes of Rubens and Fragonard. Renoir's most important series of the decade came from an invitation by the French government to execute a painting for the Musée du Luxembourg, a new museum devoted to the work of living artists. Renoir made five versions of Two Young Girls at the Piano for the Minister of Fine Arts to choose from; the version in the Metropolitan's Robert Lehman Collection is one of the finest. The subject of girls at a piano recalls eighteenth-century French genre scenes, especially those of Fragonard. Renoir had painted the subject several times before, most notably in a major portrait commission. In the early twentieth century, despite old age and declining health, Renoir persisted in artistic experimentation. He took up sculpture, hiring a young assistant and collaborator, Richard Guino, to create models after his designs. He continued to paint portraits and his Tilla Durieux is arguably the finest of his late portraits . The pyramidal composition, lavish costume, and textiles framing the sitter derive from Titian's portraits, attesting to Renoir's continued admiration of Renaissance art. The warm, red tonalities and expansive sense of monumentality, however, are features of his late style. During this period, Renoir lived mostly in the south of France near the Mediterranean coast. His physical deterioration was the impetus for this change of climate, but Renoir was also drawn to an arcadian ideal of Mediterranean classicism in his art. This artistic preoccupation is nowhere more apparent then in his twentieth-century bathers. The Rubenesque nudes he had been painting reached a level of unprecedented exaggeration in the twentieth century, culminating in the massive Bathers at the Musée d'Orsay. Mary Cassatt infamously described these pictures as of "enormously fat red women with very small heads." Nevertheless, their over-the-top vision of edenic plenitude was admired by Picasso, Henri Matisse, and Aristide Maillol. Renoir was celebrated in the early twentieth century as one of the greatest modern French painters, not just for his work as an Impressionist but also for the uncompromising aesthetic of his late works 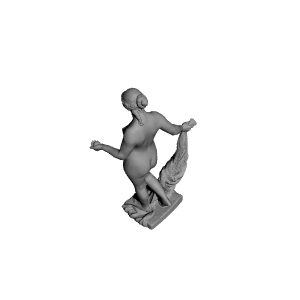