3D
Scan The World
6,506 views 532 downloads
3 collections
Community Prints Add your picture
Be the first to share a picture of this printed object
0 comments

Vertumnus was a nature god who could assume any shape, and is here shown wooing the nymph Pomona. He gained her presence by disguising himself as an old woman, and proceeded to plea his cause. When this failed, he revealed his true identity as a youthful god; he is shown here having just removed his mask.

Vertumnus and Pomona was almost certainly originally made for Canons in Middlesex, the seat of the Duke of Chandos, as a companion to a similar group by Scheemakers. After Canons was demolished the group went to Stowe in Buckinghamshire, where it functioned as a garden sculpture until it was sold in 1921. The two groups were clearly viewed as a pair. In 1797 and 1799 they were noted as being in the garden. By 1848, when the first Stowe sale took place, they were in the South Portico. Because the sculpture stood outside for many years, the surface of the marble is badly weathered.
Delvaux came from the Netherlands, but worked in England from 1717 to 1728, mainly as a partner of Peter Scheemakers (1691-1781).

Vertumnus and Pomona is a story of seduction and deception from Ovid's Metamorphoses, a popular source of imagery for 17th century Dutch painters. Vertumnus, the Roman god of seasons and change, assumed multiple guises as he attempted to woo the recalcitrant wood nymph Pomona. Govaert Flinck has painted the moment in the courtship when Vertumnus, disguised as an old woman, is speaking on his own behalf to a bemused Pomona. The two figures are dramatically pressed to the front of the picture plane in a tightly defined space and are set against a dark background of tree trunks and exposed roots.

While the setting is intimate and the figures are so close that their knees almost touch, the distance between them is unmistakable. Pomona, seated on the right, is portrayed as a ruddy complexioned young woman, elegantly-if curiously for the setting-dressed in white satin, with a richly embroidered bodice. She leans to her left, her check pressed heavily into her hand, her gaze directed off into the distance. Whether she is listening intently to her companion or dreamily lost in her own thoughts is impossible to discern.

On the left, Vertumnus is portrayed in mid-gesture, "her" right hand moving toward Pomona; her left, turning back to herself. In contrast with Pomona's youthful complexion, Vertumnus' coarse skin and features bear the evidence of age. What isn't immediately certain, however, is Vertumnus' gender. While the rust-colored clothing and turban-like headdress suggest a woman's garments, there is a manly quality in both the face and hands. Flinck, exercising his culture's delight in sexual innuendo, solves the riddle for the careful observer who notices the walking stick that leans against the inside of Vertumnus' thigh. 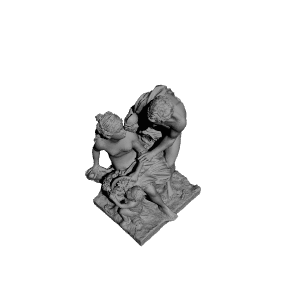 ×
3 collections where you can find Vertumnus and Pomona by vam