Vessel of the Underwater Panther

3D
360°
Scan The World
2,805 views 73 downloads
1 collection
Community Prints Add your picture
Be the first to share a picture of this printed object
0 comments

Vessel of the Underwater Panther

The prominent colored swirls and eye motifs mark this animal as an Underwater Panther, one of the primary beings in the ancient Mississippian belief system and that of their descendants. The swirling pattern on its sides signifies water, while the eye markings allude to the animal's unusually keen vision. Red and white were symbolically significant colors that represented fundamental oppositions such as peace and war, light and dark and the on-going struggle between the celestial and subterranean realms. Underwater Panthers belonged to the subterranean and possessed great supernatural power. Their significance led Mississippian and subsequent artists to depict them frequently in many forms and media, including three-dimensional sculptures like this vessel. 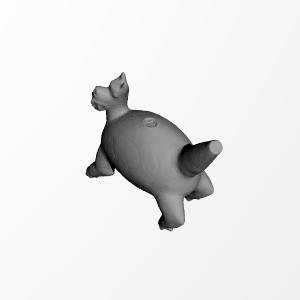