3D
Scan The World
2,778 views 104 downloads
Community Prints Add your picture
Be the first to share a picture of this printed object
0 comments

This bust is located at the gardens on top of the Pincian Hill, were the first public park ever opened in the city. Romans, as well as tourists, love to stroll along the shady paths and avenues that criss-cross this 6.5 hectare - 16.5 acre area, lined with a large series of marble busts, scattered all over the place. A few of them are also found by the bridge that connects the gardens to Villa Borghese. They feature Italian personalities who, over 25 centuries of history, distinguished themselves in several fields: among them are national heroes, monarchs and statesmen, painters and sculptors, scientists and inventors, novelists and poets, historians and philosophers; a good number of them are patriots and insurrectionists.

In February 1849, the government of pope Pius IX was upthrown by the Roman Republic. In order to provide with an economic help the many unemployed artists who lived in Rome, the new administration set aside some funds, and gave commission to a number of sculptors to carve 52 busts of distinguished Italian personalities, as a decoration for the Pincian Gardens. One of these, was Vincenzo Salvatore Carmelo Francesco Bellini  (3 November 1801 – 23 September 1835), an Italian opera composer, who was known for his long-flowing melodic lines for which he was named "the Swan of Catania". Many years later, in 1898, Giuseppe Verdi "praised the broad curves of Bellini's melody: 'there are extremely long melodies as no-one else had ever made before'. A large amount of what is known about Bellini's life and his activities comes from surviving letters—except for a short period—which were written over his lifetime to his friend Francesco Florimo, whom he had met as a fellow student in Naples and with whom he maintained a lifelong friendship. Other sources of information come from correspondence saved by other friends and business acquaintances. After his initial success in Naples, most of the rest of his short life was spent outside of both Sicily and Naples, those years being followed with his living and composing in Milan and Northern Italy, and—after a visit to London—then came his final masterpiece in Paris, 'I puritani'. Only nine months later, Bellini died in Puteaux, France at the age of 33. 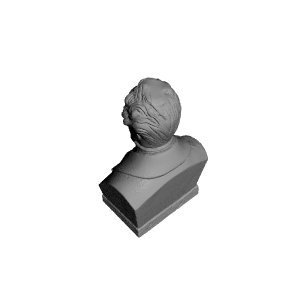 ×
0 collections where you can find Vincenzo Bellini at The Borghese Garden, Italy by Scan The World