3D
Scan The World
3,104 views 174 downloads
2 collections
Community Prints Add your picture
Be the first to share a picture of this printed object
0 comments

This relief is typical of many funerary monuments produced in and around Naples in the latter half of the 1300s. The presence of St. James and St. John the Baptist could indicate the name of the deceased, as people often placed their patron saints on tombs or artworks that they commissioned.

The relief was included in a London Sotheby's sale of 13 March 1931, and was identified as an altar front from the church of San Martino in Naples. It was attributed to Tino di Camaino. It is not clear if the relief was sold at that time, or to whom, as it appeared again in another London Sotheby's lot from 18 June 1946 with many of the same objects from the 1931 sale. The museum purchased it for £40 pounds. It was probably not an altar front but the top of a sarcophagus.
The left hand angel and left side of the shield underneath the angel were damaged and made up in plaster. The damage must have been sustained prior to 1931, as it can be seen in the photograph in the Sotheby’s sales catalogue of that year.
The attribution to Tino di Camaino given in the sales catalogues of 1931 and 1946 was removed by John Pope-Hennessy in his 1952 catalogue, and the relief was given the more general authorship of “Fourteenth Century Neapolitan.”

Historical significance: Further research is needed to determine the origin of the V&A relief. The relief clearly shares similarities with the Artus tomb. However, it is difficult to determine which came first. The shared motif of an angel standing over an upward curving band above a heraldic shield would suggest that the creator of one tomb knew of the other. The difference in the poses of the angels – in the V&A relief they are bearing plates filled with what may be fruits and in the Artus tomb their hands are in prayer position – could indicate the variation of a stock workshop design. However, the carving style appears to be quite different. Generally artists from the same workshop had a similar style. The figures on the V&A relief are stocky and seem to have smaller hands than the figures in the Artus tomb. However, the saints and the child Jesus share an intensity of expression due to the faint tracings of incised pupils. The presence of St. James and St. John the Baptist could indicate either the dedication of the church in which the owner was buried (as it is not clear why the church of San Martino was indicated as the provenance) or the patron or name saint of the deceased. 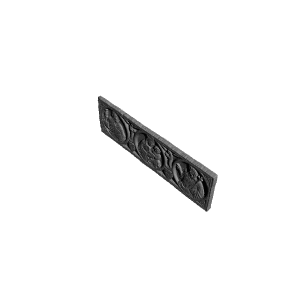