This is a fragment of the midfield of the front wall of a sarcophagus depicting Virgin and Child. The relief  was badly damaged in may 1945
A Madonna is a representation of Mary, either alone or with her child Jesus. These images are central icons for both the Catholic and Orthodox churches. The word came from Italian ma Donna, meaning 'my lady'. The Madonna and Child type is very prevalent in Christian iconography, divided into many traditional subtypes especially in Eastern Orthodox iconography, often known after the location of a notable icon of the type, such as the Theotokos of Vladimir, Agiosoritissa, Blachernitissa, etc., or descriptive of the depicted posture, as in Hodegetria, Eleusa, etc. 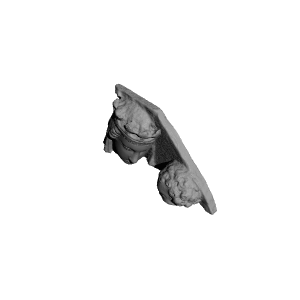