3D
4,552 views 104 downloads
Community Prints Add your picture
Be the first to share a picture of this printed object
0 comments

Cyber Troopers Virtual-On MARZ is an action-adventure game which was first released on the PlayStation 2 in North America and Japan, with no European release. Marz is designed on the basic gameplay rules of Virtual-On Force, and uses most of the assets from Force, ranging from the stages down to the Virtuaroids.Once the greedy corporate executives harnessed the extreme powers of their technological network, towering mechanized warriors known as Virtuaroids (VRs) quickly replaced the outdated warring methods of the past. The 49-foot destructive giants drew vast crowds and the conniving power hungry suits soon saw yet another way to exploit the mindless masses with industrialized combat performances known as Limited War. Mars was redeveloped as the battleground and hordes of people with an insatiable thirst for widespread destruction and carnage came from all over to gaze in awe as the battles commenced. 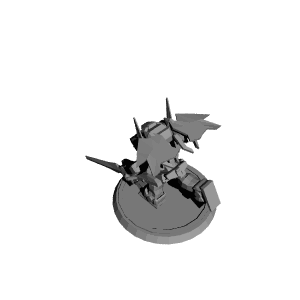