Virupaksa at The Guimet Museum, Paris

3D
Scan The World
2,584 views 118 downloads
Community Prints Add your picture
Be the first to share a picture of this printed object
0 comments

Virupaksa at The Guimet Museum, Paris

In a previous life he was a garuda and, along with Vaishravana, had attacked two nagas who lived fearlessly on the ocean surface but were unable to harm them. The nagas explained that they had taken refuge in Buddha Kashyapa and their virtue protected them. Hearing this the two garudas also took refuge. The two nagas and twogarudas all prayed to be reborn in the time of Buddha Shakyamuni in order to support him.

He protects beings in the western direction, averting forces that obstruct the practice of Dharma. His glance is harmful to beings and so he avoids looking at them by gazing at the stupa he carries.

The sculpture is highly decorated with jewels of a blue-green color. An elaborate and detailed headdress and costume are included on this standing figure that holds a serpent in one hand and in the other a structure. There is detailed chasing on the clothing of the small statue. 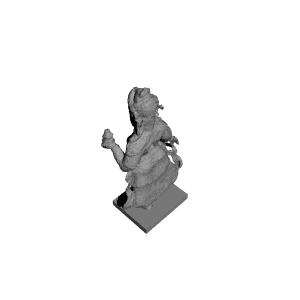 ×
0 collections where you can find Virupaksa at The Guimet Museum, Paris by Scan The World