3D
Scan The World
2,070 views 72 downloads
Community Prints Add your picture
Be the first to share a picture of this printed object
0 comments

Vishnu (or Viṣṇu) is a Hindu god, the Supreme God of Vaishnavism (one of the three principal denominations of Hinduism) and one of the three supreme deities (Trimurti) of Hinduism. He is also known as Narayana and Hari. As one of the five primary forms of God in the Smarta tradition, he is conceived as "the Preserver or the Protector" within the Trimurti, the Hindu Trinity of the divinity.

In Hindu sacred texts, Vishnu is usually described as having dark complexion of water-filled clouds and as having four arms. He is depicted as a pale blue being, as are his incarnations Rama and Krishna He holds a padma (lotus flower) in his lower left hand, the Kaumodaki gada (mace) in his lower right hand, the Panchajanyashankha (conch) in his upper left hand and the discus weapon Sudarshana Chakra in his upper right hand. 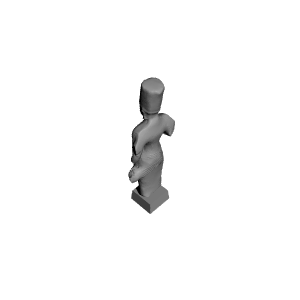 ×
0 collections where you can find Vishnu at The Guimet Museum, Paris by Scan The World