3D
Scan The World
3,029 views 177 downloads
1 collection
Community Prints Add your picture
Be the first to share a picture of this printed object
0 comments

This bronze figurative sculpture depicts a nude athlete drying himself off with a towel. It is identified to be Vladimir Salnikov, a former freestyle swimmer to took part in the 1988 Olympic Games. Its counterpart, depicting the shot putter Vladimir Salnikov, can be downloaded here.

Vladimir Valeryevich Salnikov (Russian: Владимир Валерьевич Сальников; born 21 May 1960) is a Russian former freestyle swimmer who competed for the Soviet Union and set 12 world records in the 400, 800 and 1,500 meter events. Nicknamed the "Tsar of the pool" but also the "monster of the waves" or simply the "Leningrad Express", he was the first person to swim under fifteen minutes in the 1500 m freestyle and also the first person to swim under eight minutes in the 800 m freestyle. He was named the Male World Swimmer of the Year in 1982 by Swimming World magazine. 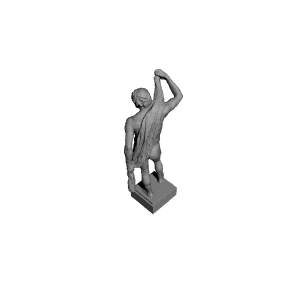