3D
Scan The World
1,588 views 84 downloads
Community Prints Add your picture
Be the first to share a picture of this printed object
0 comments

This relief was found in Neo Phaleron, Attica.

On one side, the center of the relief is occupied by the horned Kephisos. On the left Artemis is shown opposite a god; on the right were three Nymphs. According to the inscription on the epistyle, the relief was dedicated to Hermes and the Nymphs.

The other side depicts the abduction of the Nymph Basile by the hero Echelos. Hermes, holding a painted whiplash in his right hand, drives the chariot that transports the two figures. The names of these thtree figures are inscribed on the epistyle, above the image: Hermes, Echelos, Basile. The

The relief was erected on a tall, inscribed poros base. The inscription on the base indicates that the relief, as well as an altar, were dedicated by Kephisodotos, son of Demogenes. 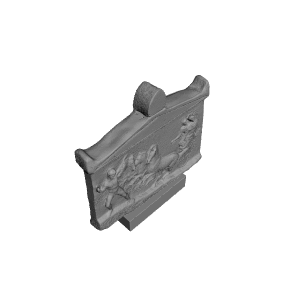