3D
Scan The World
1,414 views 51 downloads
1 collection
Community Prints Add your picture
Be the first to share a picture of this printed object
0 comments

Rectangular limestone statuette base with a carved bilingual and bigraphic inscription in Greek (Cypro-Syllabic) and Phoenician (Phoenician alphabet). The maximum width and depth of the stone are preserved, but the upper part of the stone quite damaged (top left, and especially top right and right where part of the Phoenician text is missing). The top of the is also damaged, thoguh the maximum height appears to represent the top of the base: at the back left surface is a deep oval trough, probably for securing the statue mentioned in the inscription, though any corresponding hole(s) on the right are are missing.

The Phoenician text consists of three lines, written right to left (sinistrograde), but is incomplete on both sides. The Cypro-Syllabic text occupies four lines, also sinistrograde, of which the beginning of the first three are also incomplete, but are fully preserved on the left side. 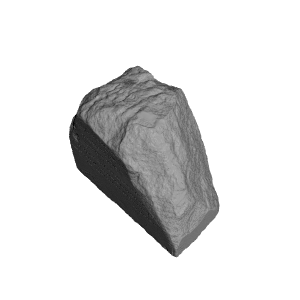