3D
Support Free Scan The World
3,775 views 214 downloads
1 collection
Community Prints Add your picture
Be the first to share a picture of this printed object
0 comments

Alberto Viani (1906 -1989) was an Italian sculptor. After studying as an assistant to Arturo Martini Academy of Fine Arts in Venice , Viani followed a personal artistic journey that led him to ever more stylized ( very known female busts ) .From 1944 he was an assistant of Arturo Martini. The artistic work of Viani was strongly influenced at the beginning of Artura Martini. In his later works he turns to a more abstract idiom. His works have followed rather reminiscent of the sculptures of Hans Arp and Constantin Brancusi. As Martini died in 1947, Viani took over as his successor to the chair of sculpture at the Academy.

Viani was, along with Renato Birolli, co-founder of the group Fronte Nuovo delle Arti in 1946th. Friend of Emilio Vedova and Sergio Bettini was for a long time near the Spatialism , without membership. One of his works , a naked bronze is exposed to the Olivetti store in Venice , building designed by his architect Carlo Scarpa , realization of which Viani has participated very actively. Alberto Viani made sculptures out of plaster, stone or bronze. His sculptures have round and soft, more flowing forms. Many of his works remind in their forms on human body, but it does not really make from. Viani took part in the first documenta in 1955 in Kassel, and also on the next, the documenta 2 represented in 1959 as an artist. In 1983 he received a Antonio Feltrinelli Prize for Art. 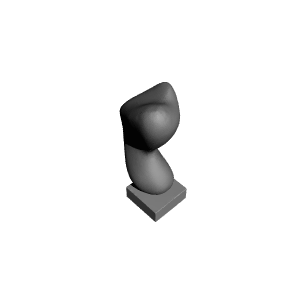 ×
1 collections where you can find Vrouwentorso at The Middelheim Museum, Atwerp by Scan The World