The valknut is a symbol consisting of three interlocked triangles. It appears on a variety of objects from the archaeological record of the ancient Germanic peoples.

Disclaimer: In recent years the valknut has been used by ignorant or just downright stupid people as a hate symbol which it most certainly ISN'T. The valknut is 3 triangle, 3x3=9. Nine is the number of realm on the World tree Yggdrasil (nine realms, none more important than the other) and the number of days Odin hung himself from the world tree to gain the wisdom of life and death (Odin who is called All-Father, not some-father). Nine is in many ways special to Heathens, in the poem The Yarn of Odin's Rune Tally it is quoted:

I looked down; I took up the runes; I took them wailing; then I fell back again. Nine mighty songs I took for the famous son of Bolthorn, father of Bestla.

In no found works has the Valknut been used to segragate any people, the only ones who use it for such purposes are quite literally too stupid to insult. 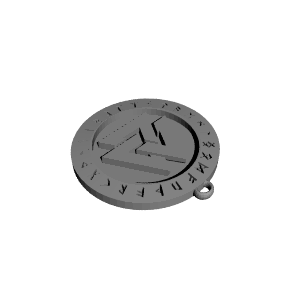 ×
0 collections where you can find Vulknut Pendant by wolfwatcher25