3D
Scan The World
3,645 views 499 downloads
6 collections
Community Prints Add your picture
Be the first to share a picture of this printed object
0 comments

The walrus has been on display at the Horniman Museum for more than a century. It most likely came from the Hudson Bay area of eastern Canada and was first seen in London in the ‘Canada’ section of the Colonial and Indian Exhibition in South Kensington in 1886. The walrus formed part of a display of animals mostly assembled by the Canadian hunter and explorer James Henry Hubbard whose exhibit was highly praised by Queen Victoria during a visit to the Exhibition. When the Exhibition closed, Frederick Horniman bought the Walrus and other Canadian animals to display in the Horniman Museum. Our Walrus is an unusual taxidermy specimen, it appears stretched and ‘over stuffed’ as it lacks the skin folds characteristic of a walrus in the wild. Over one hundred years ago, only a few people had ever seen a live walrus, so it is hardly surprising that ours does not look true to life. This is probably why it remains one of the most popular exhibits on display in the museum today.

The same object with a base can be downloaded here. 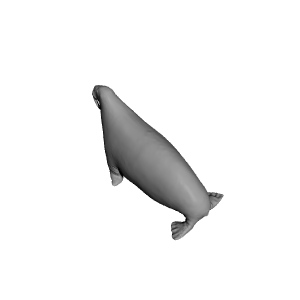 ×
6 collections where you can find Walrus (no base) by horniman