"Go back to your lives. Go and be the Doctor that I could never be." - The War Doctor (John Hurt)

On November 23rd 2013, Doctor Who fans met The War Doctor for his first and last appearance in The Day of the Doctor. Over the course of this fantastic episode, marking the 50th anniversary of the show, John Hurt masterfully portrayed his character as a conflicted Doctor pulled out of his own timeline at the moment of his darkest hour, sent forward in time to fight alongside his future selves. While the three Doctors work together to save the Earth from an alien threat, the War Doctor comes to realize the consequences of the actions he is about to take.

The Day of the Doctor, as well as all previous post-reboot seasons of Doctor Who, is available to watch on Amazon Prime Video.

If your looking to make a great War Doctor costume for Halloween, or if you just want to own his uniquely awesome Sonic Screwdriver, then this design is for you. Happy printing!

This design comes in two halves in order to avoid the need for support material. You will need to print both halves or the non-symmetric parts of the design won't match up. Once printed, the two halves will need to be glued together. 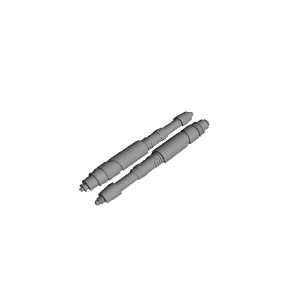