3D
Scan The World
3,574 views 175 downloads
1 collection
Community Prints Add your picture
Be the first to share a picture of this printed object
0 comments

The dignified figure of a Hemba warrior, with his upright posture and lofty, outward gaze, would have served as the focus for the veneration of its ancestors among one of the Hemba peoples of the central and eastern Congo (Location: Area of Lualaba, Luika, and Lukiga rivers). Each clan possessed such an ancestral effigy that was revered as the image of a founder, both actual and ideal. As a receptacle for the ancestor's spirit, the figure is both conceptually and stylistically universalized; it is not converned with the specific or momentary. Such figures were preserved in funerary houses or chiefs' houses and expressed the continuing relationship between the living and the dead. Reflecting the cult of the warrior assimilated from the Luma people. the Kimbell ancestor figure holds a large parade knife in his right hand a lance in his left. As extensions of his arms, his weapons symbolize his courage and masculine physical prowess. These emblems of power, along with the carefully twimmed beard and the characteristic, cruciform headdress, probably allude to the office of war chief. Retaining overall the columnar stability of the living tree from which it was carved, the sculptor has structured the image from bold spherical and cylindrical forms, enlivened by the interplay of forceful diagonals and stabilizing horizontals. 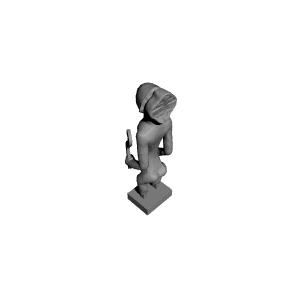 ×
1 collections where you can find Warrior Ancestor Figure at The Kimbell Art Museum, America by 3DLirious