3D
Scan The World
3,465 views 244 downloads
Community Prints Add your picture
Be the first to share a picture of this printed object
0 comments

In Indian Buddhist mythology, the guardian kings of the four firections dwell in the upper slopes of Mount Meru. In a japanese Buddhist temple, the guardian kings are placed on an elaborate platform representing Mont Meru. The guardian of the West is displayed, depicted as a warrior wearing a armor. He has his arm raised, which once held a weapon. He stands on a demon, a symbol of evil.

Slow print with many supports. 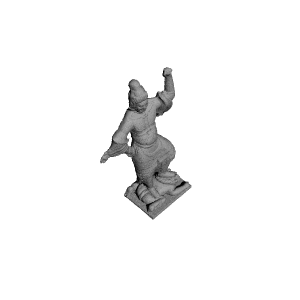