Warrior with a Slain Child (Achilles and Troilus)

3D
360°
Scan The World
1,376 views 121 downloads
1 collection
Community Prints Add your picture
Be the first to share a picture of this printed object
0 comments

Warrior with a Slain Child (Achilles and Troilus)

This larger than life group marble, formerly in the Farnese Collection, depicts a warrior carrying a slain child over his shoulder - known to be Achilles and Troilus. The Roman work was made in the 2nd - 3rd century by an unknown artist.

Troilus was a son of King Priam of Troy, killed (whilst tending to his horses) by Achilles, an event which according to some sources precipitated the death of Achilles himself at the hands of Paris.

He gets little mention in the ancient cycle of epic poems (the Iliad Bk. 24, 257 records his death, late in the Trojan War). The medieval romance of Troilus and Cressida (Chryseis) is much better known, but has no connection with antiquity. 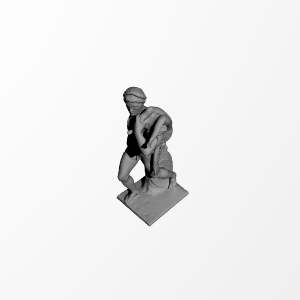