This archaic-style bust depicts Miltiades, an Athenian citizen known mostly for his role i nthe Battle of Marathon, as well as for his downfall afterwards. He was the son of Cimon Coalemos, a renowned Olympic chariot-racer, and the father of Cimon, the noted Athenian statesman.

He is also known for the 'Helmet of Miltiades', a bronze helmet unearthed during the works at the temple of Zeus in Olympia. The helmet is signed with his name, perhaps written by himself, and was brought to the temple of Zeus to thank the deity for a battle he had won. This is an incredibly rare example of an artefact that can be traced back to the warrior who wore it. The helmet can be found at The Archaeological Museum of Olympia.

This bust is believed to have been restored and turned into a herm, using an original cast from The SMK (KAS640), and the original marble from the Antikensammlungen and Glyptothek, Germany. 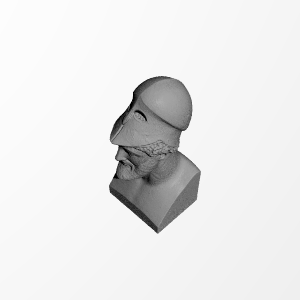