By that I mean this part will hold real water and not leak. I have printed several vase-like parts before, and they all leaked when I put water in them. This makes such parts far less useful than if they were water tight.

This part has double walls - not counting the spiral ribs which are really just decoration - and each wall is made with 4 loops. The bottom is also double walled with each surface made with 4 layers.

The second photo shows what a layer height of 0.300 mm looks like. Normally I use 0.200 mm, but I wanted to see if increasing this as a way to reduce total print time would be OK. The final result is not as good as 0.200 mm, but I still think it is acceptable.

I used Craftware to slice the part, after running the original STL file through 3D Builder to correct errors. Total print time for this part was 11 hours 11 minutes. 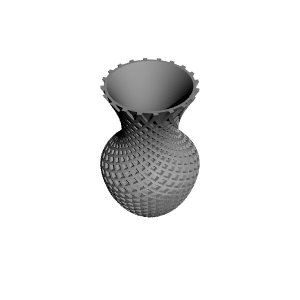 well my 25cm finished still leaking so here in the netherlands THF is not easy to get so gonna try clear coat but again the design is epic :D