Wei State round coin at The British Museum, London

3D
Scan The World
2,184 views 101 downloads
2 collections
Community Prints Add your picture
Be the first to share a picture of this printed object
0 comments

Wei State round coin at The British Museum, London

During the Warring States period, some states issued round coins with a round or square hole in the middle. The inscriptions usually indicate a weight or value. This Wei State coin has the weight in 'jin'.

Wei was an ancient Chinese state during the Warring States period. Its territory lay between the states of Qin and Qi. Surviving sources trace the ruling house of Wei to the Zhou royalty: Gao, duke of Bi, was a son of King Wen of Zhou. After a successful military expedition, Bi Wan was granted Wei, from which his own descendants then founded the house of Wei. Jin's political structure was drastically changed after the slaughter of its ruling dynasty during and after the Li Ji Unrest. Afterwards, "Jin had no princely house"  and political power diffused through its extended relations including Wei. In the last years of the Spring and Autumn period, the founders of Wei, Zhao, and Hanjoined to attack and kill the dominant house of Zhi in 453 bce, resulting in the partition of Jin. King Weilie of Zhou finally legitimized the situation in 403 bce, when he elevated the three houses' heads to the rank of marquess . The state reached its apogee during the reigns of its first two rulers, Marquess Wen of Wei and Marquess Wu of Wei. The third ruler, King Hui of Wei, declared himself an independent sovereign and concentrated on economic developments, including irrigation projects at the Yellow River. Hui felt that Qin in the west was weak and their land a barren waste. He focused on conquering the well-settled eastern lands which were richer in known resources. However, a series of battles including the battle of Maling in 341 bce checked Wei's ambitions while Qin's expansion went largely unimpeded, boosting its economy and military strength. Wei eventually lost the western Hexi region, a strategic area of pastoral land on the west bank of the Yellow River between the border of modern-day Shanxi and Shaanxi, to Qin. Thereafter, it remained continuously at war with Qin, requiring the capital to be moved from Anyi to Daliang. Wei surrendered to Qin in 225 bce, after the Qin general Wang Ben diverted the Yellow River into Daliang, destroying the capital in a flood. 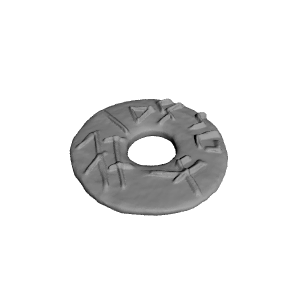 ×
2 collections where you can find Wei State round coin at The British Museum, London by Scan The World