This is a scan of one of the carvings on the stone gate pillar at the southeastern entrance to Weston Park, in Sheffield City Centre in the UK. Walking in to the park it's on the lefthand post. It's a very nice carving obviously from the Victorian era as indicated by the VR carved into the background: i.e. Victoria Regina meaning Queen Victoria.

The scan was done with the Sony 3D Creator app on an Xperia XZ1 Compact smartphone. It did a good job getting a representative shape, although it obviously isn't quite as detailed as the original. Also, it didn't manage to include the upper corners, although they're very simple and easy to edit in if considered important. However, it's still a useful scan that makes a nice 3D print if you're interested in the local history. 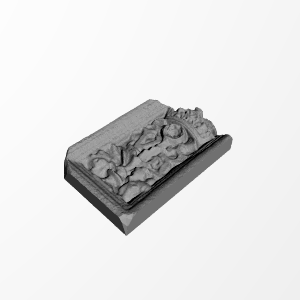