3D
360°
1,871 views 103 downloads
1 collection
Community Prints Add your picture
Be the first to share a picture of this printed object
0 comments

I got a whiteboard at home (and some in the office) but the included aluminum pen holders are mostly crap.

So I looked around for a pen holder that would fit my needs. Most of them were very precise with holes for the pens which means, they need to fit exactly to the pens. Also, it's a lot more hassle to put the pens into them or grab them to sketch an idea fast.

I wanted a simple solution to just put around six pens into it without worrying too much.

So I created some kind of can my self that would hold up to seven pens.

At the back side, I put in two recesses of about 2cm x 8cm with a depth of 1.5mm to place the magnet bands into them. I bought magnet bands by Amazon (can get them at Aliexpress as well, just been a bit in a hurry) with a width of 2cm and a thickness of 2mm. It came at a 3m roll, so simply cut about 8cm for each recess. The included tape did not stick that well to the printed object, so I added some superglue.

Works perfect for me and looks great in my opinion as well. ;) 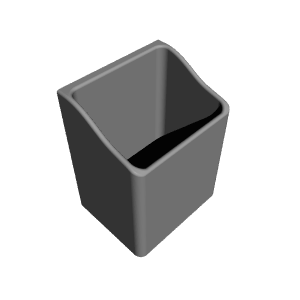 ×
1 collections where you can find Whiteboard pen holder by jendit